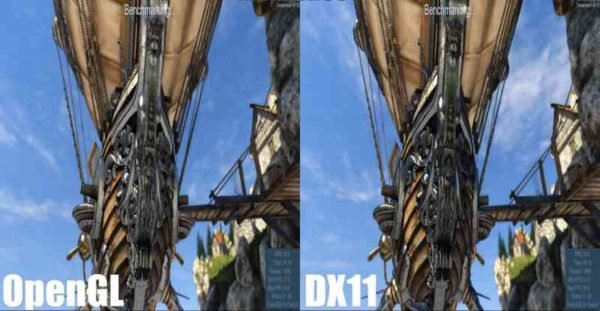 Directx vs OpenGL vs Vulkan API Which is Better Overall?:- A gamer plays a game well, but game development appears a tricky thing to them because of so many things in it.

This is why, developers move more likely toward gaming consoles because of their capable hardware, very fewer chances of piracy, and programmer and developers have direct access to the internal hardware while programming their software.

This feature of the console gives chance to developers to make full use of hardware capabilities. That’s why Direct X and Vulkan API are so important for PC and Android gaming.

Let’s Understand What is Directx or DirectX 12?

Directx, in brief, is an API (Application Programming Interface) whose main work is mainly of handling tasks related to multimedia, programming of games, video encoding-decoding, etc.

Directx is the sole property of Microsoft which is used in its Operating Systems and Xbox Console. The main reason for its development is to allow direct access to video cards, Keyboard, Mouse, and other system components. It was 1995 when it is first launched with Windows 95.

Microsoft marketed Directx well as a gaming platform and programmers adopted it well because at that time OpenGL requires high-end hardware and was more focused on engineering and CAD uses.

The APIs made by Microsoft are all began with the same word ‘Direct’ like Direct3D, DirectSound, DirectPlay, DirectMusic, DirectDraw, DirectCompute, DirectWrite, Direct2D, DirectGL, DxDiag etc. These come in the SDK (Software Development Kit) consisting of runtime libraries in binary form.

In a console-specific version, DirectX was used as a basis for Microsoft’s Xbox, Xbox 360, and Xbox One console API. The API was developed jointly between Microsoft and Nvidia, which developed the custom graphics hardware used by the original Xbox. 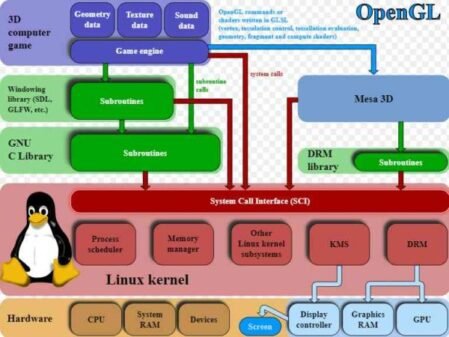 OpenGL (Open Graphics Library) is an API just like Directx. Its work is to render 2D & 3D vector graphics with the power of GPU (Graphics Processing Unit).

OpenGL is a very flexible API from time to time new versions of OpenGL are released with the introduction of new features. Generally, new features are developed by the members with the help of extensions provided to the vendors. Each extension is associated with a short identifier, based on the name of the company which developed it.

The features introduced by each new version of OpenGL are typically formed from the combined features of several widely implemented extensions.

The API (Application Programming Interface) is defined as a set of functions that may be called by the client program, alongside a set of named integer constants (for example, the constant GL_TEXTURE_2D, which corresponds to the decimal number 3553). Although the function definitions are superficially similar to those of the programming language C, they are language-independent.

Directx vs OpenGL (Vulkan) API Which is Better Overall?

With the same hardware, Windows 7 OpenGL gives 303.4 fps — compared to Windows 7 DirectX gives 270.6 fps only. In short: OpenGL is faster than DirectX.

Clearly, OpenGL is a faster API, why is DirectX still the predominant API? It isn’t because of image quality or features: OpenGL 4.0 has all of the shaders and tessellation and widgets that DX has. It isn’t because of hardware support: All Nvidia and AMD graphics cards support the latest version of OpenGL along with DirectX.

But Vulkan is there to tackle Directx and in 2-3 years, we are going to see the difference as new programmers are joining the line of development.

What is the work of Direct X & OpenGL API?

DirectX, simply, is software developed by Microsoft that works with PC’s hardware components. Generally, it’s a collection of the application programming interface, or API, capable of handling tasks related to rendering 2D and 3D vector graphics, rendering video, and playing audio on the Windows platform.

Nvidia says ‘Combining the world’s fastest GPU hardware with a high-quality graphics driver made for the perfect showcase for the next-generation features of Windows 10 and DirectX 12‘.

Next-generation OpenGL initiative ‘Vulkan‘ is a new low-overhead, cross-platform for 3D graphics and computes API. It was released on 16 February 2016 and with its release, it made so much whisper in the market. It targets high-performance real-time 3D graphics applications such as video games and interactive media across all platforms.

Compared with OpenGL and Direct3D 11 and like Direct3D 12 and Mantle, ‘Vulkan‘ is intended to offer higher performance and more balanced CPU/GPU usage. Other major differences from Direct X 11 and predecessor OpenGL are ‘Vulkan‘ being a considerably lower level API and offering parallel tasking. ‘Vulkan’ also has the ability to render 2D graphics applications, ‘Vulkan’ is actually better distribute work among multiple CPU cores which made it more capable of doing high-performance tasks easily. (Directx vs OpenGL (Vulkan) API Which is Better Overall?) 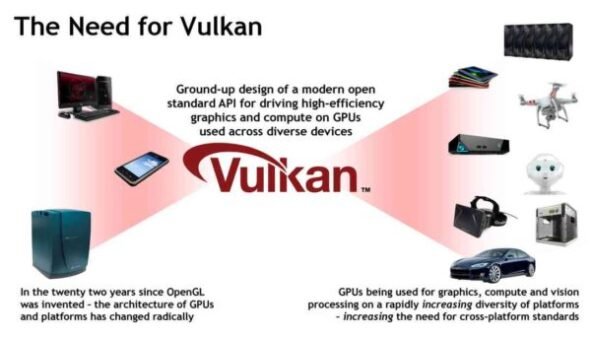 Most developers are today shifting toward ‘Vulkan’ due to its more compatible dynamic and capable API.

What “Direct X vs OpenGL vs Vulkan” Supports today?

‘Direct X’ actually supports mostly every software, Game Engine, and Game in the market as of now. The API is so powerful that every developer thinks of it before developing programs. For many, it is the basis for there every development and this is why Directx is popular. The Xbox is wholly based on DirectX API which is a great and very powerful as well as capable console.

Like Directx, OpenGL is also a very powerful development platform and it will continue its journey. If we talk about the support every major technology company is funding its development and it is evident that all the emulators have two options one is Directx and the other is OpenGL.

As Vulkan is not a very old API so its support is still limited but increasing tremendously over 4 year time period. Since ‘Vulkan’ is announced the compatibility of ‘Vulkan’ is increasing very fast and will catch Direct X soon as its predecessor OpenGL.

Overall the gaming performance of Vulkan API is very high comparing to Directx and OpenGL. In many emulators, Vulkan already surpassed DirectX and its predecessor OpenGL. 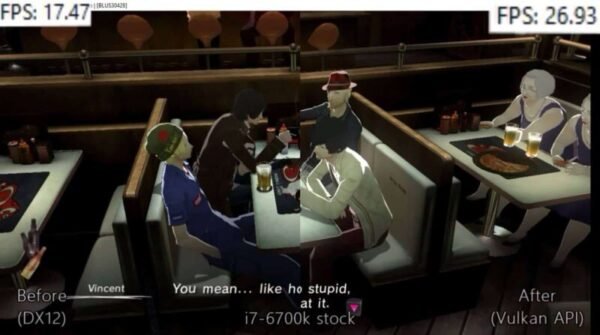 Now almost all the games are going to come with both DirectX and ‘Vulkan’ support. As both API’s have their own advantages over the hardware. ‘Vulkan‘ will grow much more in the Android platform and Emulators and DirectX will continue to dominate the Windows platform.

What are Vulkan Runtime Libraries?

The benefit of these Libraries is that they enhance our visuals as well as the performance by using the combined performance of CPU and GPU.

Many people don’t know about them so they directly uninstall them but after some time it gets reappears through the driver update. For non-gamers, this driver software is of no use. But for games, it is useful if the game supports the use of Vulkan API.

If you are not a gamer and want to uninstall the Vulkan RT Libraries, directly go to your Control Panel from the Start menu or by clicking on the Windows key + I, & go to Apps and see if the Vulkan RunTime Libraries are installed. If you see them installed you can just uninstall them from there.

1) Microsoft is the whole and sole company that designs and develops DirectX APIs and not to mention underlying drivers. Whereas OpenGL is maintained by Khronos. Underlying drivers are developed by individual vendors like Nvidia.

2) Microsoft is a profit-making organization but Khronos is an Open Source Organisation.

5) Talking about graphics performance DirectX wins the race over OpenGL ( why not Microsoft is shelling out so much money on its products ).

6) Desktop games will be most effective on Windows than on another OS like Linux which uses the OpenGL rendering pipeline.

7) OpenGL is just for graphics, rendering stuff. While DirectX has control over sound, networking, multimedia.

6) Some of the functions which are absent in DirectX: accumulation buffers, immediate mode, and display lists.

7) DirectX expects to manage the hardware resources by the application while the user is not bothered to do it in OpenGL.

Besides the differences, OpenGL and DirectX have a lot of similarities as well. Both of them use a programmable graphics pipeline, both support 3D operations. If logic is correct porting graphics code from OpenGL to DirectX and vice versa should not be a tough task for the programmers.

Why do Companies still use Directx instead of Vulkan API?

Firstly DirectX is used for years and it is very difficult for the programmers to switch to Vulkan API. For using Vulkan API, the developers have to learn in order to develop. Which is very expensive and time taking. Developers have to see to their business as well as with the technicality of the subject.

Vulkan API is still very buggy and very little technical information is available for the development as compared to DirectX.  A very few studios are successful with Vulkan in the past and the majority of studios stick to D3D9, D3D11, & D3D12.

But this is changing as fresh talents are coming into the development field the scope is widening. Soon lots and lots of games and software will be using Vulkan API as an option to DirectX.

Example:- Visual Studio has plenty of tools for Directx 12 but nothing for Vulkan API. (Basically, Visual Studio is heavily used for game development).

One of the main reasons is the Xbox. The game developers have to develop for Xbox also which is a Microsoft property running on Directx 12 API. This also makes the task tough for developers to switch to Vulkan API.

Vulkan and OpenGL are open source projects so they don’t have huge marketing money to spend. That’s why the growth of Vulkan API is slow comparing to Directx.

Vulkan is still in the early stages and is not even close to functionality equivalent to DX12. Truly speaking Microsoft does not want their product to go down that is why they stick to Directx API in most of their workloads.

Conclusion: Directx vs OpenGL vs Vulkan

Directx vs OpenGL (Vulkan) API Which is Better Overall?:- Directx vs OpenGL vs Vulkan, All are going to grow more and more and will give us something amazing and powerful. Gaming is going to be incredibly stunning both visually and virtually.

Computation of task is going to take a huge jump over time. Sound or audio quality is going to be never like before. System performance is also going to be very high and everything will be going to be amazing.

Directx vs OpenGL vs Vulkan combined going to satisfy our gaming needs in different platforms with their very powerful APIs.

As the competition between companies grows stronger the development process will skyrocket as currently, we are seeing between AMD, Nvidia, and Intel. Soon more and more powerful hardware is coming and graphics APIs will use the hardware to give us an experience that we never had before.

What are your views on Directx vs OpenGL vs Vulkan API…Comment in the section down below.