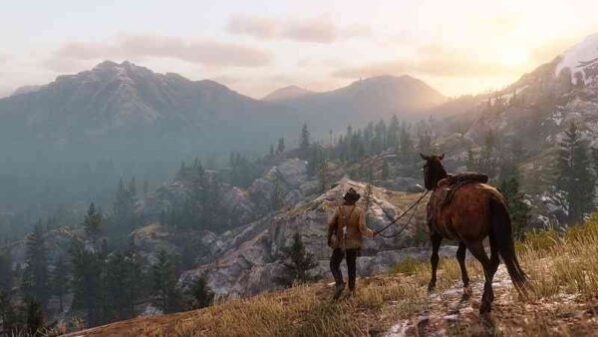 Sony announced a remake of Shadow of the Colossus for the PlayStation 4 during their Electronic Entertainment Expo 2017 press conference.

It was released on February 6, 2018. The remake is led by Bluepoint, who developed the earlier PlayStation 3 remaster. The developers remade all the game’s assets from the ground up, but the game retains the same gameplay from the original title along with the introduction of a new control scheme.

Ueda had since left Sony, but provided a list of recommended changes to Bluepoint for the remake; he stated that he does not believe many of them will be implemented, nor would they add any of the colossi that had been cut from the original game.

Similar to its predecessors, Far Cry 5 is an action-adventure first-person shooter set in an open world environment which the player can explore freely on foot or via various vehicles.

Unlike previous titles in the series where the player takes on the role of a set character, the game will feature a new character creator, which the player can use to customize their character’s appearances, gender and skin tone.

The game will also feature the old aiming system from other titles which allows players to lean around cover.

The player will have a variety of ranged and explosive weapons to fight against enemies, while the game will place a renewed emphasis on close-quarters combat compared to previous Far Cry titles by introducing a wider range of melee weapons.

Darksiders III takes place parallel to the events of the previous games in what is described as a dilapidated, war-torn planet Earth.

It follows the protagonist Fury, Rider of the Black Horse, sister Horseman of the Apocalypse in her quest to hunt down and destroy the Seven Deadly Sins.

Red Dead Redemption 2 is an upcoming Western-themed action-adventure video game developed and published by Rockstar Games. It is scheduled to be released for PlayStation 4 and Xbox One on October 26, 2018.

The game is a prequel to the 2010 title Red Dead Redemption and will be the third entry in the Red Dead series. It follows the story of outlaw Arthur Morgan, a member of the Dutch van der Linde gang.

God of War is a third-person action-adventure video game in development by Santa Monica Studio and to be published by Sony Interactive Entertainment (SIE). The game was released on April 20, 2018, for the PlayStation 4 (PS4) console.

It will be the eighth installment in the God of War series, the eighth chronologically, and the sequel to 2010’s God of War III. The story is a new direction for the series, as it will be loosely based on Norse mythology—all previous games were based on Greek mythology.

Series protagonist Kratos returns as the main character, and he now has a son named Atreus. Kratos acts as a mentor and protector to his son and has to master the rage that has driven him for many years.

What are your views on 10 Top Best PlayStation 4 Exclusive games Releasing 2018?……comment in the comment section down below.