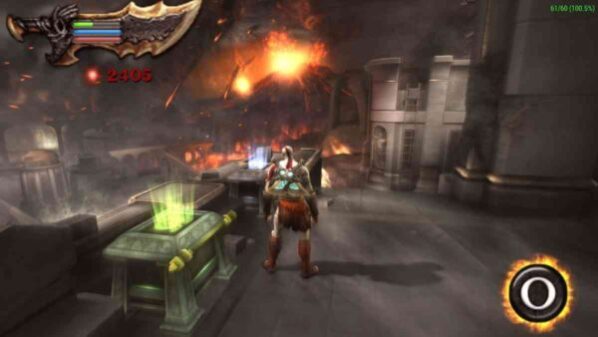 10 Top PSP Games (PPSSPP Android Games) Of All Time:- PSP has been unquestionably the greatest handheld console of all time. After a decade also PSP games magic has not gone, today also people love to play the games on their portable console. People who don’t have PSP, they play PlayStation portable games in ‘IOS‘, ‘WINDOWS‘, or ‘ANDROID‘ devices. For playing simply download the ‘PPSSPP emulator’ and start playing on your Windows Computer, Ios or ‘Android Smartphone’.

Burnout Dominator is an awesome car racing game. The game is fast pace and fluid which will pass your time for hours. The game contains so many cars to choose from. Burnout also features an amazing soundtrack with the game containing famous songs, this will make your game more enjoyable.

The main focus in Burnout Dominator is the return of “Burnouts”. Burnouts are the result of draining a complete boost meter without stopping.

The boost meter in Burnout Dominator is primarily orange flames prior to a full boost meter, at which point in time the flames turn blue (known as “Supercharge Boost”).

Driving dangerously while using supercharge boost will light up the arrows on the boost meter, and when they are all lit, one can obtain a Burnout once the current supercharge boost has drained. The process can be continually repeated allowing the player to get a Burnout Chain.

The main single-player mode known as the World Tour is split into 7 different series, based on the different classes of the car that are in the game. The series are Classic, Factory, Tuned, Hot Rod, Super, Race Specials and Dominator.

Assassin’s Creed: Bloodlines is an action-adventure, stealth game set in an open world environment. Contains similar, almost the same, gameplay to Assassin’s Creed in terms of control style, although there were minor modifications to the control scheme, due to the lack of specific keys and buttons.

Some features from the previous game, such as Eagle Vision, were removed for the improvement of the controls. Due to the system platform, the AI has been seen as somewhat inferior when compared to the first game, making combat easier and simpler.

A minor addition was featured in the combat aspect of the game, allowing players to instantly assassinate a target when they are downed in combat. The game has a rich story-line with the number of side quest. This game is worth playing once.

Gun Showdown is a cowboy style game. The game is so entertaining that you will play this game again and again.

Gun features an open world environment, including side-missions that add to the story. Players control the protagonist, Colton White, from a third-person perspective. While traveling from town to town, bandit attacks are frequent and players must either escape or defend themselves.

Players can hunt and kill various animals like buffalo, wild horses, and even stray dogs and farm animals. The player can also cause mayhem within communities but can attract attention from lawmakers and other gunslingers by doing so.

They act as gunslingers protecting righteousness or seek the reputation as they face resistance fighters, local lawmen, renegade soldiers, and vengeful Apaches and Blackfoot. A Town Patience meter goes down every time a civilian is killed.

Once the patience meter reaches zero, a showdown ensues between the player and the locals.

Several minigames are included in Gun. As the player progresses through the game, they can choose to complete side missions, including poker tournaments, cattle herding, law enforcement, and bounty hunting. Players can purchase upgrades using money obtained from these optional activities and by mining gold veins.

Prince of Persia Rival Sword is a portable version of Prince Of Persia The Two Thrones. The game contains awesome graphics and hours of gameplay. This game also features additional chariot races which you can play from the main menu.

The game is set after the events of Prince of Persia: Warrior Within or Revelations in PSP in which the Prince kills the Dahaka saves Kaileena and prevents the Sands of Time from being created.

Unlike the previous games, the story is narrated by Kaileena. The Prince’s actions alter the timeline of events that took place before that point.

In the original timeline, the Vizier and Maharajah traveled to the Island of Time and found an hourglass filled with the Sands of Time. In the modified timeline, they find the hourglass empty.

Since the Vizier never released the Sands of Time and fought the Prince, he is still alive at the beginning of this game. Farah, who helped the Prince during the events for Sands of Time, has never met the Prince.

The game is set Seven years after the events of Prince of Persia: The Sands of Time, the Prince finds himself constantly hunted by a terrible beast known as the Dahaka.

The Prince seeks counsel from an old wise man who explains that whoever releases The Sands of Time must die. Because the Prince escaped his fate, it is the Dahaka’s mission as guardian of the Timeline to ensure that he dies as he was meant to.

The old man also tells of the Island of Time, where the Empress of Time first created the Sands. The Prince sets sail for the Island in an attempt to prevent the Sands from ever being created, an act he believes will appease the Dahaka.

After a battle at sea with an enemy force led by a mysterious woman in black capsizes the Prince’s ship, the Prince washes ashore unconsciously onto the Island of Time.

Also Check Out: How To Play PS2 Games in PC (PCSX2 Emulator)

10 Top PC Games (Windows Games):- Games are always exciting especially when it comes to PC games. Today there are thousands of games available to play … END_OF_DOCUMENT_TOKEN_TO_BE_REPLACED

Top 13 Amazing Android Games Under 10MB:- Games are exciting to play even if they are in "small mb". Today most of the teen and young kids are crazy … END_OF_DOCUMENT_TOKEN_TO_BE_REPLACED